Our TiVo died right before Thanksgiving. It happened sometime while we were remodeling the livingroom. We unplugged it for two days while it lived in the center of the room, plugged it back in, and now it will reset to a blank screen and become unresponsive. TiVo has an exchange service which isn't free but is nice since I won't loose my lifetime service, but for the next few days we're watching TV in real time - just like normal folk - and it's driving us up the wall!

Turkey Day vacation was good. It was comprised mainly of the following four things:

1) Driving
2) Eating
3) Drywall & other related fixer-upper house repairs
4) Making sure the dog was okay and not peeing in our shoes.

Did I say driving? Okay, just making sure.

Thought you guys might get a kick out of a short video of Sydney playing with her new favorite toy - the Kong! There's a little cheesy flavored treat at the bottom, and she will spend as much time as needed to get to it!

The hunt is on right now to find a boarding kennel for the Christmas holiday. Janine and I are going to be traveling to California (both the bay area and Tahoe), and the last thing Sydney needs is the stress of air travel. The trick is finding a kennel with room - most places filled up 6-12 months ago and have multi-page waiting lists. Luckily I've been able to find 3 out of the dozen I've called that do have space, but we need to check them out first before we trust them with our pup.

Sorry if the blog is getting a little too puppy oriented right now, but she's a definite source of bloggable goodness. *melt* :-)

Posted by Austin at 02:10 PM
Is today still Tuesday?

Puppy is doing much better these days. I think that the issues from the past weekend were due to stress, but a vet visit and a few meds helped give us some piece of mind.

I can't believe that Thanksgiving is next week. These holidays are really starting to sneak up on me, and it was really weird when I had the revelation yesterday that turkey day was one week away. My brain didn't want to process the idea - it was too scary.

We are bringing the pup out to Michigan with us next week, so we'll see how she does running around two acres with bunnies. This should be interesting. ;-)

So the trip to the vet went well. We're not so sure about the actual veterinarian - he wasn't a very cozy person to be around - but he gave us a slew of medicine that should combat every known cause of Sydney's diarrhea.

The worst part of it was this anti-diarrhea gel that they fed into her mouth with a big plastic injector. Most dogs hate the stuff, and Sydney was just like most dogs. She was shaking her head back and forth, and with the medicine foaming from her mouth, little bits of chunky mint-scented foam were being flung across the room. She still smells like mint, and she's not letting us forget how hard we laughed at the vet's office - after two 'accidents' and a teaspoon of 'get-the-hell-away-from-me', it doesn't take too much experience to figure out she's pissed off. Literally.

Janine has a post with a link to a video clip we took with her camera on Sunday. Yup... we're dorks.

Sydney is doing fine in the house, and we're starting to get more and more comfortable with her (and she with us). I was starting to feel a lot of anxiety earlier this week - Is she going to pee/poo in her kennel? On the carpet? Why is she doing this or that? - but I think it's starting to come under control as the time goes by.

We do have more pictures of the pooch, but they're still on the camera. I'll see if I can leave her by herself for 5 minutes and post them later tonight. ;-)

Everyone, please put your hands together and welcome Sydney. 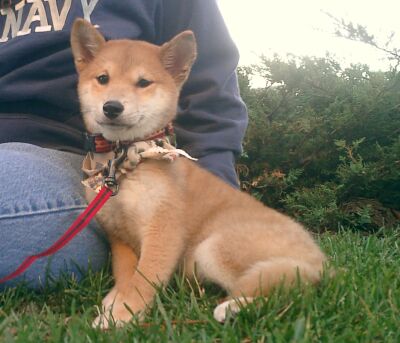 She's a 3-month old Shiba Inu puppy, and is incredibly shy and a little shakey. She's managed to walk around a little bit and search the kitchen, but that's about it.

Oh, and within five minutes of being in the house she releived herself - not once, but twice - right on the kitchen rug. Methinks I know her favorite spot in the house.

Posted by Austin at 04:58 PM
Where would you like to go today?

So for a while I've been drooling over the Pioneer AVIC-N1 navigation/DVD/CD/MP3/enter acronym here. It's basically marketed as the first all-in-one system for your car that can do navigation, and I've been waiting for something that was able to do navigation and had it's own retractable screen.

My better half, on the other hand, thought it was nice but thinks better things are to come. Her main gripe about in-car navigation - there's no way to include traffic accidents and congestion into the system. It may be able to get you from point A to point B, but it can't get around gridlock.

Well, the wait may be over soon. Pioneer and XM Radio on Tuesday sent out a press release announcing the new AVIC-N2. It will be able to use XM's brand-new NavTraffic system and forsee congestion and accidents on the road and - here's the kicker - suggest alternate routes to avoid the problems. This will be the first product to use the NavTraffic feature, but this sounds sweet.

Now, it does require an XM receiver and subscription (read as "At least $150 in equipment and $13/month"), but the whole idea of traffic-smart navigation is just over the horizon. Sweet!

Sorry... the geek inside of me just had to post on this!

Newspaper cover of the day.

Q: What's the difference between Vietnam and Iraq?

A: Bush had a plan to get out of Vietnam.