Janine and I went out and played Bingo last night. Yeah, you may not think that Bingo is incredibly exciting, but... umm... it's not. Except if you win! We ended up winning a game, and even though we had to split the pot with another winner we walked out with $125 cash and a good case of emphysema from the smokers. Not too bad for two newlyweds who brought down the average age of players by at least 30 years.

Next week I'll be heading out to Texas to build our prototype in our plant down there. It'll be kinda neat this time, seeing that I actually designed a lot of stuff on the board and we'll have every part needed to make the prototype complete. Since we don't have any software to run the thing it won't really do anything when I power it up (except draw power and make LEDs light up), but it will still be neat to see if it does something besides makes smoke. ;-)

That's about all I have to blog about right now. Not too exciting, I know, but I feel bad after not posting for a week.

So most of you know about our new G5 and it's incredible feats of coolness. It turns out that Apple is making our new toy a little bit cooler with the release of Panther, the 10.3 version of OS X.

This thing has definitely got some bells and whistles, some of which are detailed in a glowing review by the NY Times. Stuff like the Expose feature, iChat AV, and even the adaptation of a few Windows-originated shortcuts definitely make the update as sweet as wedding cake. I don't think I've ever been this excited about an Apple product before since I got a modem for my first hand-me-down IIse.

If there was ever a chance for me to want to switch to Apple, this definitely makes the idea a whole lot more appealing.

Did you ever wonder what it would smell like if a refrigerator filled with rotten veggies farted?

Thanks to the aroma of our men's room, I no longer have to live without knowing the answer to life's oldest riddle.

Posted by Austin at 12:53 PM
Not Bitter, Just Revengeful

He's well in my past, but if only a similar event had occurred while I lived under Mr. Crap-Ass back on North Campus.

I still daydream of slashing that ass-hat's tires...

Posted by Austin at 03:18 PM
Is this related to that Potter boy?

You are Form 7, Gryphon: The Wyrm.

"And The Gryphon displaced the balance of
the world in his favor. With grace and
control, Gryphon deceived mankind and ruled
over civillization. But even he realized that
all good things must come to an end."

Some examples of the Gryphon Form are Satan
(Christian) and Baphomet (Assyrian).
The Gryphon is associated with the concept of
control, the number 7, and the element of wind.
His sign is the gibbous moon.

As a member of Form 7, you are a very in control
individual. You maintain your coolness in most
situations and always seem to be prepared.
Though some may say you are a bit of a control
freak, you know that you really do make the
best leader even if others can't see it.
Gryphons are the best friends to have because
they have a positive influence on people.


Which Mythological Form Are You?

Even though there's no legal rank on a pirate ship, everyone recognizes you're the one in charge. Even though you're not always the traditional swaggering gallant, your steadiness and planning make you a fine, reliable pirate. Arr!

My pirate name sounds about as lame as 'John Smith'. Someone will walk the plank for this!

Posted by Austin at 09:37 AM
Sleepless in Seattle

The birthday trip to Seattle was a roaring success. Pike's Place Market was a blast, so full of colorful flowers, local artwork, and low-flying fish. I even managed to make myself a walking attraction after I purchased a donut that was about 10" in diameter. I counted about a dozen double-takes, twenty "Did you see the size of that donut" exlamations, two firghtened children and one old lady even took my picture.

Shawn was a blast to hang out with and definitely showed us around the town. His office is incredibly posh, his pad has a view that would rival my old apartment in downtown Chi-town, and he has access to some kick-ass clam chowda! He even told us about his work's alternative commute program, which includes special incentives for getting to work by walking, biking, or even kayaking! Birthday festivities included libations, fire, cake and smores.

It was a whirlwind weekend adventure, and even with going to bed at 1:30am and waking up three hours later for our flight, we had a blast! Pictures to come later... especially of that donut.

So it's 1:20am Pacific time, but for us it's 3:20am Central and we're still awake after about 10 hours of traveling. Seattle looks very cool in the flow of flourescent lights, and we can't wait to see it over the next 30 hours. So far we only have plans to go to Pikes Place (the place where they throw the fish) and see the very first Starbucks mothership. Other than that, and maybe a stop at the Space Needle, we'll probably just celebrate Shawn's birthday with drunken abandon!

This city is WAY to caffeinated for it's own damn good!

Posted by Austin at 03:26 AM
Who needs to spend weekends at home?

So some of you may remember the dilema I talked about two weeks ago. Well, it's official...

We're going to Seattle this weekend to celebrate someone's birthday.

The flight times kinda suck (especially the 6:00am departure on Sunday), and we have to fly through Dallas (Don't ask...), but the price was good and I get to keep my little status symbol. Huzzah! 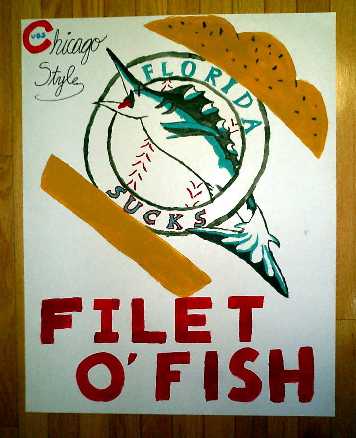 So we're heading out to Michigan this weekend. We're driving out tonight... in the rain... through the Chicago traffic. It's been a while since I've done this drive.

The only thing I wanna do this weekend - Apple Cider and Donuts. Other than that, I'm good at playing chauffeur and general dead weight.

How often can one say "I have tickets to a National League Championship Series game at Wrigley Field?" Not very often, considering they haven't one a playoff round in 95 years.

Today, however, I can say that I have those tickets. Four of 'em for the first Cubs game at Wrigley either next Tuesday or Friday. Right-center field bleacher seats, 4th row.